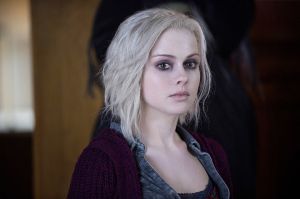 “You can skulk around, lamenting all that you’ve lost, try to keep yourself numb and isolated. Or you can embrace who you are.”

Liv of the new hit show iZombie spends her time kicking ass and taking brains, acquiring a new job in a morgue to get her fix.

She also helps solve crimes, even if she has to get physical to do it. Check out her Kung Fu moves! 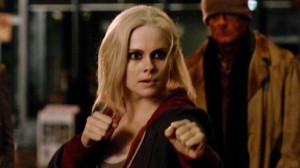 But what I’m far more interested in is Liv’s emotional strength. Like vampires, zombies are highly metaphorical creatures. Liv’s whole life is destroyed in one night. She is turned into a zombie against her will and consequently loses her job, her friends, her family, and much of who she was. This is symbolic of any number of derailing disasters that can affect humans in their lives. Think about losing a fiance to a breakup, a family member to illness, or yourself due to a mugging or a rape, or even something less traumatic like a mid-life crisis. I mention rape because afterwords, Liv feels half dead. She doesn’t know who she is anymore, but she is different and not whole. A strange man has infected her with a zombie virus against her will and it has changed her, made her darker. Her mood has plummeted to more depressed territory and it takes its toll on everyone she loves. Her romantic relationship falls apart and her family and friends believe she has PTSD (Post Traumatic Stress Disorder) which of course she does, though not for the reasons they think.

So keeping in mind that zombieism is metaphoric for any number of emotional stressors that can affect a person, Liv shows tremendous strength in picking herself back up and getting back out into the world. Losing her fiance isn’t the worst thing that could happen, nor is having your family and friends become mad at you. Nothing is ever the end of the world, as long as you’re still alive. And Liv is still alive. Despite the horror that has befallen her, she is still Liv. She’s still the hardworking, helpful, caring person she always was, so she has two choices:

She can wallow, and become a true emotionless, flesh-eating zombie, or she keep acting on her lively personality by pursuing a career. So she can’t be a doctor anymore, and she won’t make as much money. Big deal. It isn’t her relationships that define her, but who she is as a person. And she’s a person who wants a career where she can make a difference.

Every week, Liv makes the conscious choice to keep living, and that even though she makes a friend at the morgue who knows her secret, she herself is enough to live for. In fact, some of the most interesting aspects of the show are the ways in which Liv chooses life. She can’t taste foods anymore, she can’t have the career of her choice, and she isn’t getting married. But there are other journeys to be had. Liv eats brains in order to remain somewhat human (if you go too long without eating, you become The Walking Dead). But brains are like a drug, and one of the side effects is gaining flashes of that person’s life (which is how Liv helps solve crimes) and their personality traits. So one week, Liv is a painter, drawing masterpieces, and feeling passion for everyone and everything, gaining an appreciation for all the beauty in the world. The next week she may be cold and logical but gain an extensive knowledge of facts. In the latest episode, she got to experience life through an old friend’s eyes who Liv described as a “death is a consequence of life kind of girl.” Now that she’s a zombie, Liv can speak languages other than English, perform martial arts, and essentially live an infinite number of lives.

Hence Olivia’s nickname, Liv. “Liv Moore.” Get it? The underlying meaning, of course, is that we have the power and ability to experience this variety of new things whenever we wish. We can learn a new language, or skill, broaden our horizons and choose to live no matter what injustices we suffer. We can choose to enjoy life to the fullest. We can “live more.”

The final message: Always choose life. You are enough.

I hope iZombie stays on the air and Liv keeps kicking ass for years to come.