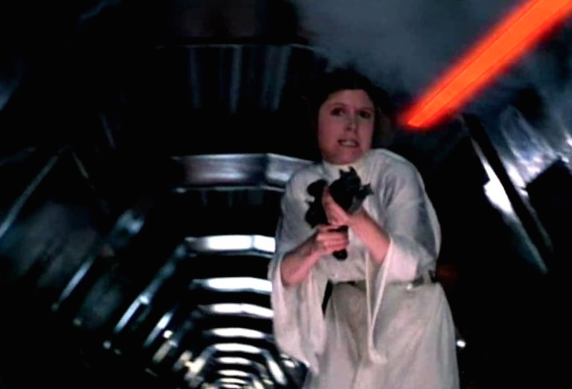 “Somebody has to save our skins.”

I opened the old draft of this blog post this morning immediately after seeing another one of the saddest headlines of what has been a brutal year: “Iconic Star Wars Actress Carrie Fisher Dead at 60.” I found that I started this blog post over a year ago. It was actually the first ever of this series that I tried to write. I just couldn’t come up with words good enough to honor her. Of all the women of science fiction, no one has meant more to me than Carrie Fisher’s Princess Leia.

I knew I was going to love her the first time I saw her. Growing up, there just weren’t any sharp-tongued, strong women in action movies. And those were the ones I loved to watch with my brothers. They were exciting and adventurous. The only problem was it was men having all the adventures. Women were sidekicks, or worse, damsels in distress. Then my mother introduced my brothers and me to Star Wars and not only was it the greatest, most exciting adventure story I’d ever seen, it featured a main girl character right alongside the boys. At first it seemed typical: They were going to rescue the Princess. But it quickly became apparent that Leia didn’t need saving, and in fact, she was probably going to keep Han and Luke alive.

From the moment we meet Leia, she’s talking back to Imperial oppressors, and she’s not the least bit afraid:

Leia: Governor Tarkin, I should have expected to find you holding Vader’s leash. I recognized your foul stench when I was brought on board.

Tarkin: Charming to the last. You don’t know how hard I found it, signing the order to terminate your life.

Leia: I’m surprised that you had the courage to take the responsibility yourself.

Tarkin: Princess Leia, before your execution, I’d like you to join me for a ceremony that will make this battle station operational. No star system will dare oppose the Emperor now.

Leia: The more you tighten your grip, Tarkin, the more star systems will slip through your fingers.

I immediately and irrevocably fell in love with her bravery and audacity.

Later, she quips to Han Solo, a strong personality himself whom she has no trouble handling:

“I don’t know who you are or where you came from, but from now on you’ll do as I tell you, okay?”

She also has no qualms about calling out the boys’ lack of mission skills:

“This is some rescue. You came in here, you didn’t have a plan for getting out?”

Due in large part to Princess Leia, when I was a little girl, no one was a bigger Star Wars fan than I was. And yet, I never saw one girl in any Star Wars toy commercial. Even upon the release of Episode VII, there wasn’t a Rey action figure to be found. “Girls just don’t buy toys” or “Star Wars isn’t really for girls” came the standard, ignorant reply. Or even better: Rey has finally made Star Wars for girls. But Star Wars has always been for girls. Only now I see little girls in commercials flying X-Wings made from cardboard boxes and this seemingly simple thing is actually so significant it brings a tear to my eye every time.

Fisher herself also spoke to my feminist bones in a way few can. She put body shamers in their place when she said:

“Please stop debating about whether or not I aged well….Youth and beauty are not accomplishments, they’re the temporary happy by-products of time and/or DNA. Don’t hold your breath for either.”

“My body is my brain bag, it hauls me around to those places and in front of faces where there’s something to say or see.”

Carrie Fisher, I will miss you so much on such a deep level. I know you didn’t always love the Star Wars icon you became, but I truly couldn’t imagine a life where I didn’t grow up with Princess Leia in my favorite movie. I am forever grateful that you gifted Princess Leia to me and to the world. May you now forever find peace, one with the Force.

Princess Leia lives on, forever sarcastic, smart, quick-witted, and tough, deadly with a blaster and strong with the Force. She will always have played as important a role as Luke and Han in the Rebellion.  She was the first Princess I ever saw or read about that was in no way in need of rescuing, and Carrie Fisher’s is the first celebrity death that I am feeling as deeply as a personal loss. But she will live on through me and through every other little girl her character helped shape into strong, sarcastic, sharp-tongued, independent, kick-ass princesses.