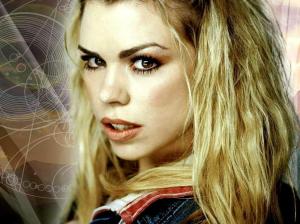 “You don’t just give up. You don’t just let things happen. You make a stand! You say no! You have the guts to do what’s right, even when everyone else just runs away.”

Let me ask you something: does that look like the face of someone you want to mess with? I didn’t think so. Don’t let the fact that she’s a pretty, 100 pound, blonde girl lull you into thinking she won’t kick your ass if you mess with the people or the planet she loves. If you piss her off, you better run for your life, because this girl is capable of carrying twice her body weight in guns: 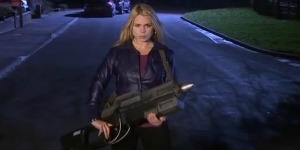 For this week’s kick-ass woman of SciFi,  I give you the big Bad Wolf herself, Doctor Who’s Rose Tyler, Defender of the Earth.

Rose Tyler is strong and brave, throwing herself into any new situation with guts and zeal, like the first time she entered the T.A.R.D.I.S., dropping everything to travel to other eras–other planets–with The Doctor in exploration of time and space, despite the inherent dangers in such an adventure.

Rose Tyler is resilient. She doesn’t have it in her to give up. Ever. Even in “Doomsday,” when The Doctor said she could never see him again because they existed in two separate universes that couldn’t be crossed, she sought him out when the universes converged again in “Journey’s End,” at least getting to say a proper goodbye to The Doctor before the final, tragic separation. By proper goodbye, I mean one that doesn’t end like this:

The words you may have noticed missing there, before he disappears, are “I love you.” Yeah. As per usual, for a freaking Time Lord, The Doctor has just awful timing and leaves us all in tears. Speaking of which, if you’d like to cry today, click below.

In addition to her resilience, especially in this moment, Rose is brave and fiercely loyal. Even though she knows she’ll lose her family–everyone and everything she knows and cares about–to an alternate universe forever, she is firm and sure in her choice to stand by The Doctor’s side in defense of Earth. Rose knows what she wants, and no one, not even The Doctor, is going to tell her otherwise.

“I made my choice a long time ago, and I’m never gonna leave you.“

Can we just talk about this quote for a minute? Think for just a moment how dedicated to someone you would have to be, how strong you would have to be, to accept that you will never see your own mother again, that you might very well die if you stay, but still to say with conviction “You are not sending me off to safety. I am going to stay right here with you, and we are going to save the world damn it!” Like I said before, Rose basically has two settings: 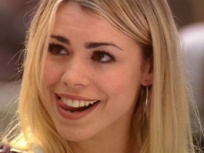 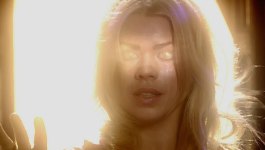 Doctor Who hints at the fact that Rose isn’t book smart, didn’t like high school, and at 19-years-old, is working in a shop instead of attending college. However, she possesses an intelligence about people and situations that can’t be measured in report cards or tests, often seeing key patterns in mysteries that The Doctor himself overlooks. What’s more impressive, is she keeps the strength to go on saving the world even after she loses him. That’s introspective intelligence. Rose is confident in and sure of herself. She derives self-worth not from the opinions of people around her, and not from the men in her life, but from her opinions of herself.  Rose loves who she is. You go, girl. 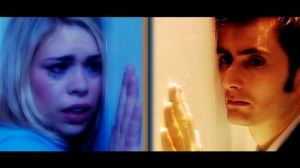 This means she has to get over this emotionally devastating, tragic separation, (metaphoric for a breakup). Even though you can see the hurt clearly dripping down her face, Rose picks herself up, and realizes that life still matters even after she’s lost her romantic partner–a strong and admirable trait I can’t stress enough for young women to emulate when going through a breakup. There’s more to life. You are more than what a boyfriend, girlfriend, or spouse makes you.

But my absolute favorite aspect of Rose Tyler: she is the Bad Wolf. The part of the show I’m referring to here, is the story arc in which Rose and The Doctor keep seeing the words “Bad Wolf” wherever and whenever they go. They don’t know what the words mean, and neither does the audience, until in “The Parting of the Ways,” when faced with certain death, The Doctor tricks Rose into safety by sending her home in the T.A.R.D.I.S. to protect her while dying himself at the hands (er, robotic plunger arm things) of the Daleks. Rose would never willingly leave him, especially in times of crisis, so she kicks and screams the whole way home, then immediately starts working on a way to get back to him. That’s my girl!

Knowing what she is about to do is dangerous, and unpredictable, she looks into the heart of the T.A.R.D.I.S. as a last resort. The T.A.R.D.I.S. gives Rose all the knowledge of time and space–all The Doctor has and more, so that she can operate the ship and find her way back to him. When she arrives, she is no longer “just” Rose Tyler, but the Bad Wolf. She emerges from the T.A.R.D.I.S., to The Doctor’s shock and awe, as a glowing, powerful goddess, finally revealing the mystery of the words saying: “I am the Bad Wolf. I create myself. I take the words; I scatter them in time and space. A message to lead myself here.”

As the Bad Wolf, Rose stands up to an entire Dalek army poised to exterminate everyone on Earth and says:

Hell yeah! She saves the Doctor and the Earth, though she herself is dying from far too much knowledge of the universe burning her brain. The Doctor saves her with a kiss, taking her pain into himself which would cause him to die, and regenerate. I love the way they sacrifice for one another 🙂

But the best part of Bad Wolf, is what’s not explicitly said in the episode. To me, Bad Wolf means that a girl–just a regular, small, young, girl who isn’t brilliant or rich, and who otherwise wouldn’t stand out in the world–is anything but “just” a girl. Bad Wolf means “I am the big bad wolf. Not a little girl in a cape. Not a victim. I have the power to decide who I want to be (I create myself) and I have the power to shape my destiny” (a message to lead myself here).

The other really cool thing about Bad Wolf is and always has been a theme of the show: that words are more important and more powerful than any physical weapon. How does Rose save The Doctor and the world? Ultimately, by writing two words all over time and space: Bad Wolf.

Finally, at the long list of her awesome qualities, Rose is inspiring. Let’s not forget this wonderful little tidbit: 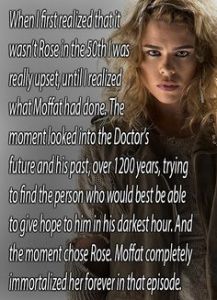 Long after Rose is gone, her spirit, her resilience, her loyalty, love, and courage will be inspiring The Doctor to go on and stand up in the face of danger and do what’s right. He knows how strong, and how courageous and capable she is, as evidenced in this dialogue from “The Satan Pit:”

“If I destroy this planet I destroy the gravity field. The rocket. The rocket loses protection, falls into the black hole. I’ll have to sacrifice Rose. {the Beast laughs.} Except that implies—in this big grand scheme of Gods and Devils—that she’s just a victim. But I’ve seen a lot of this Universe. I’ve seen fake gods and bad gods and demigods and would-be gods. And out of all that, out of that whole pantheon, if I believe in one thing—just one thing—I believe in her.” {he breaks the vase.}

The Doctor knows that Rose can take care of herself, and she does save herself. He never has to worry about protecting a damsel in distress. Rose is the hero of her own story.

In “The Shakespeare Code” he professes his faith in her again:

For her bravery, resilience, loyalty, confidence, and ability to inspire, Rose Tyler will forever be a Kick-Ass Woman of SciFi.

What are your favorite Rose Tyler moments? Please leave a comment below 🙂

One thought on “Kick-Ass Women of SciFi & Fantasy: Rose Tyler”