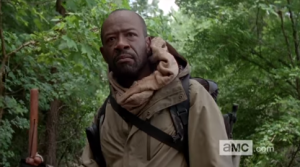 Let me get the bad out of the way first, because, as always, there’s very little of it:

I don’t like when the characters have to be stupid in order to create the desired scenes in the story. Obviously, Nicholas is up to no good, making sure Glenn sees him leave the community after Glenn specifically told him not to and made Nicholas feel like the childish moron that he is. So why does Glenn follow Nicholas out into the woods to his doom without taking Maggie who was right there, or anyone else with him, or at least telling someone where he was going? At least if he mentioned it, maybe someone, like his wife, would have shown the slightest bit of concern that he’s out in the woods with an enemy Alexandrian after dark even though he said he’d be at the meeting.

Rick isn’t there either. And, like, the meeting is about him. There’s no “Michonne, why don’t you go wake up Rick, and tell him we’re about to start?” They just go on with the meeting like it’s no big deal that people are missing at this hour, especially the person in question to be exiled.

Where’s Rick? Off fighting a walker. Because the gate to the gated community was left wide open. Okay, I know you Alexandrians are completely inept and unqualified to handle the apocalypse, but come on bro, close the gate. It’s important. Instead of completing his extremely important duty, the Alexandrian asks Gabriel to close the gate for him and skips off to the town meeting. Gabriel has meanwhile flipped his lid, so you might say, he meant to leave the gate open. If that were the case, wouldn’t he just have come inside without even touching the gate? Or did he want it to look like he really meant to close it? Either way it comes off as just outstanding vigilance on everyone’s part /sarcastifont/.

So Glenn and Rick are missing in the dark, and didn’t it get dark really fast? In one scene it’s high noon, and then in the next it was black of night. I think this was because the writers wanted a cool, creepy-looking meeting around a campfire for Porch Dick to crash. That’s fine. Just start the scenes a bit later in the day so it doesn’t feel like we lost a chunk of hours in between.

Speaking of missing time, how did Glenn get away from those 3 walkers while he was writhing in agony? Don’t get me wrong, I’m glad he did. I guess it’s just one of those things you have to suspend your disbelief for. At any rate, I’ll take Glenn alive because I thought for sure he was going, what with that “I love you,” to Maggie and all the heavy foreshadowing and close calls they’ve been giving him. But Glenn’s not out of the woods yet. (literally and figuratively) He’s injured outside the walls with the wolves nearby. (How chilling was that scene at the end where they looked through the pictures of the community?) I don’t read the comics, simply because I stumbled upon the show first, and now don’t want to spoil myself by reading ahead. From what I understand, people can die in the comics and live in the show or vice versa, or like Daryl, only exist in the show, so I’m holding out hope for Glenn to stay for the long haul. Sigh, I’m going to end up sad aren’t I?

Finally, a lot of people had a problem with the scene where Carol threatened Pete saying things like “Why would a guy who beats his wife be afraid of an old lady?” I’ll tell you why: Because Carol is a badass who stands up for herself, and Jessie is a pathetic blob of weakness. Pete is used to his tiny wife, and tinier kids taking his shit. He’s probably never come up against a strong woman in his life, and when it finally happened, he melted into a puddle of his own cowardice like all bullies do when finally confronted. I loved this scene. A victim of domestic violence herself, Carol is done taking shit from abusive husbands. I only wish Jessie could have stood up to Pete herself. Now she’s missed her chance to show strength, letting Carol, Rick, and the community solve her problem for her. All Jessie seems to do is cut hair and cry. Hopefully at least, she’ll inspire real women to take a more active role in their own abusive relationships. Hopefully she also starts showing some strength now, or she’ll surely be one of the next to die. Anyway, rock on, Carol.

Which leads me to the rest of the good:

There’s been so much good writing this season. I love how Rick told Jessie that you keep the windows in tact, you keep society in tact, and then he and Pete crashed through the window. I love how when Rick left Jessie’s house the first time, he saw kids walking dogs and holding balloons as though their society was storybook perfection. Rick is of course thinking, like the rest of us no, no it’s not. Your policy is to leave your own people behind to save yourselves. You’re weak. You allow women and children to be beaten so you can have a doctor. Your society actually kind of sucks. And after the fight with Pete, the red balloon flies into the air, the societal facade finally shattered.

But one of the best surprises from the last episode was Morgan! When I first saw him I thought “Wow, he’s become Donatello from the Ninja Turtles.” We learn that Morgan, now totally un “cray cray” values all human life. One of the most depressing recurring themes in the show is how little hope survives. As Rick says, people measure you in what they can take from you–how they can use you to live. There are very few humans left, and the ones who are left seem to only want to kill each other. Characters suffer and die, and rarely achieve any small victories that offer hope for any kind of future in this world. Morgan, like Glenn, offers hope. I loved the end scene, where he looked at Rick with fear and disgust, because something clearly has broken in Rick (and understandably so) that he no longer feels that value for everyone. Remember back in season one where he would put walkers out of their misery just to be kind?

Another good thing: Michonne really is with Rick! She had me wondering for a while. But not only did this episode solidify her loyalty to Rick, she took her katana back and the group is finally starting to seem like themselves again. They will not be lulled to sleep.

Despite some writing flaws in the finale, this episode was thoroughly entertaining. I heard some fans say it was the worst finale ever and bereft of action, and all I can ask is “What finale were you watching?” My heart was hammering the entire time, and I found it so refreshing that for once, no one (important) died.

The dead: Only Reg, Pete, and some unknowns and walkers! Yay!

I guess this was a sore spot for some people who were promised tears and blood, but I don’t want anyone to die. Enough main characters have died over the years. If the writers keep up their promise that no one is safe, soon there will be no one left, or at least no one we care about. You hear a lot of fans say if __________ dies, we riot. Or no matter who dies, we keep watching because it’s not just about one person. Both sides have merit. If everyone was safe, the show wouldn’t be suspenseful or real or hold our interest. But if too many of the main core die, I have to tell you, I’ll be part of the group who quits watching. I’m only partially invested in how the apocalypse affects human behavior. What I’m really interested in at this point is how it affects these particular characters’ behavior. Rick, Carl, Glenn, Maggie, Daryl, and Carol are who I am interested in. Maybe you can kill one or two more of them, (and fans would still be pissed) But what then? If they keep killing off one or two per finale, we don’t have too many finales left. And even if we do reach the end, without any of the characters who were on the journey, why should it matter? Right now, Rick, Carl, and Glenn are the deal breakers for me. I’d be sad to see the others go too, but I wouldn’t stop watching. For these three I think I would. Glenn is the most descent character left, as last night proved. His courageous act of forgiveness towards Nicholas solidified his unwillingness to kill unless absolutely necessary. Let me tell you something about Glenn: all he wants to do is help people and love Maggie. Please leave him alone.

As for Rick, he’s the main character. I’ve been watching HIS journey, really, since the beginning, and the journeys of those around him. I don’t want to see the others complete the journey without him. I keep saying “complete journey” but I don’t even know if that’s a possibility. As of now, it looks like the writers will keep bringing in new characters and killing off others. It could go on ad infinitum in that way. Whereas in Breaking Bad, they had a set number of seasons in mind, a clear ending in mind, and made every moment up until that ending count. I’d quite like to see something like that on The Walking Dead, but I have a bad feeling that I won’t.

Carl has to be the future of the show, and of the world. It’s so interesting to see kids grow up in this world. It will be all Judith knows. I want to see someone reach adulthood with this as their normal, and see how it continues to affect them. Plus, if Carl dies, Rick will be destroyed, and I don’t want that. Besides, terrible things can happen to characters without them dying. It doesn’t always have to be death to equal conflict and drama. Sometimes things get much more interesting when there’s more characters alive to harbor all that conflict. Now that Pete’s gone, so will that conflict be.

Feel free to disagree. In fact, I insist on hearing all opinions! What were your thoughts on the season finale? Please comment below.

5 thoughts on “The Good, The Bad, and The Dead: Thoughts on The Walking Dead Season 5 Finale”